The KeyMusician Keyboard provides the essential elements of volume control, even though typing keyboards provide no information about how hard a key is pressed. It does this primarily by way of the keyboard-activated Velocity and Volume sliders in each performance pane:

You can reach the Insert/Delete keys, as well as the left/right arrow keys, with your right hand (while playing chords on the numeric keypad) with a little stretching.

Changes to both of these sliders are transmitted as part of the MIDI performance data in a MIDI recording.

The Volume slider affects the loudness of the notes currently playing, as well as future notes played, like turning up (or down) the volume on a player.

They are useful for changing the volume level within a piece, and (in the case of the Volume slider) for fading out a note at the end of the piece or the end of a phrase. You can restore the former volume (and velocity) level by hitting the “Home” key. This means you can gradually increase (or decrease) the volume as you play, then instantly restore it to its former setting.

Typing keyboard with volume control (the knob in the silver area)

On most keyboards that control volume, there is a key to increase volume, and a key to decrease volume. Each of these keys can be pressed repeatedly for more volume change.

These volume changes are not sent as part of the MIDI data, and are best used for setting up the overall volume level of your instrument. You can use them during a performance, but they won't be included as part of a MIDI recording.

Beware: These keyboards also have a “Mute Sound” key. Be careful that you don't accidentally press that, leaving you wondering why the sound suddenly went silent!

The Numeric Keypad window for controlling volume looks something like the following screen-shot: 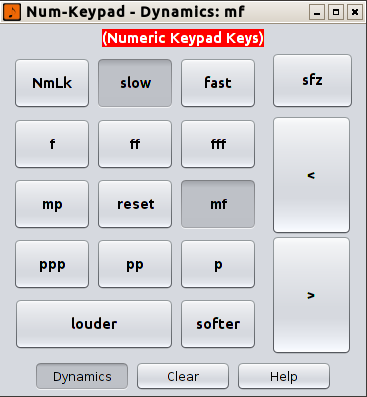 The “Dynamics” version of the numeric keypad window

This version of the keypad window is activated by clicking the “Dynamics” button (at the lower left) to select it. If you click it again (deselecting it), the window changes back to the Chords version.

You can also select or deselect the Dynamics window by pressing the “Pause/Break” key (or F14 on a Mac keyboard).

Although an expert pianist/keyboardist (with their years of prior learning), would prefer the per-note volume control of a velocity-sensitive keyboard, if you are still learning to play music, the Dynamics window greatly simplifies the task of playing consistent volume levels.

If you use a velocity-sensitive MIDI keyboard (which you can do with the KeyMusician Keyboard), a lot of learning effort goes into hitting all of the notes you play with just the right force to play at a given volume level. There is also a lot of practice involved in avoiding your strong fingers playing too loud, and your weaker fingers playing too soft.

By using the Dynamics window and its numeric keypad keys, you can set the volume level to what it says in the music, simply by pressing a single key.

The Meanings Of The Keys

The table below shows each loudness marking name (what you would see in the sheet music), the numeric keypad key used to select it, along with its meaning. The loudest setting is at the top, and the softest (most quiet) setting is at the bottom:

So when you see a loudness marking (also referred to as dynamics) in the music you are playing, you simply press the numeric-keypad key corresponding to the loudness marking you see in the music. Only one such setting can be effective at a time, so any prior setting is deselected for you.

Sometimes in printed music, the loudness is specified in English (or another local language), but where you know the meanings above, you can select the right button.

On the right side of the window, are three buttons also specifying loudness. The following table explains these other terms, and their meanings:

In music notation, the “<” and “>” shapes are extended horizontally to indicate the area in the music which is to be increasing (or decreasing) loudness, as shown in Aere's sheet-music fragment below:

Notice the elongated < and > markings above, showing where the volume-change takes place

In music notation, there is also an accent symbol below (or above) a note, that looks like “^”, or alternatively, a short ">" symbol, which means that individual note is to be “accented” (played louder). Though there is no button for this, it can be done using the “louder” button (0-key), or by specifying a higher loudness marking, and then (after playing it) the original marking.

So now that we've explained what the markings mean, let's explain the individual buttons on the Dynamics dialog.

When the “louder” button (0-key) is selected, the note (and subsequent notes) are played at a louder volume. When it is deselected, the volume goes back to what was used before.

The “softer” button (period-key) works the same way, only the notes (when selected) are played softer.

Some buttons on the Dynamics dialog affect the Velocity slider, while others affect the Volume slider.

The Volume slider affects the loudness of the notes currently playing, as well as future notes played, like turning up (or down) the volume on a player. You need to use this slider to fade-out (or fade-in) a note.

The following screen-shot shows which buttons affect the Velocity slider, and which affect the Volume slider: 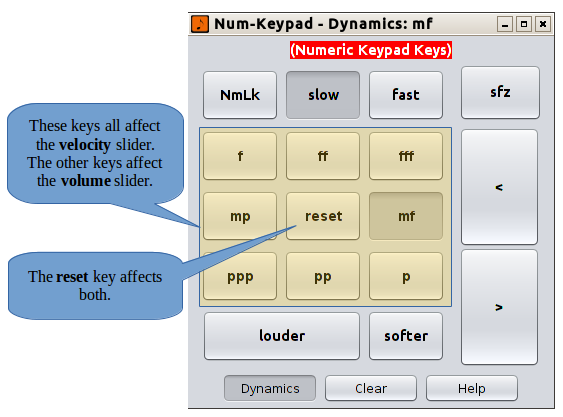 The numeric-keypad keys 1, 2, 3, and 4, 5, 6, and 7, 8, 9 (labeled above as ppp, pp, p, and mp, reset, mf, and f, ff, fff), select the loudness using the Velocity slider. All notes played after using one of these keys will use the new Velocity setting. The Velocity slider does not affect the volume of any note currently playing.

The reset key is special, in that it specifies both the velocity and volume sliders, based on the default (or initial) values from the performance pane Velocity and Volume sliders.

The remaining keys (not-yet described) of the numeric-keypad affect the Volume slider.

Beware that some instrument sounds, or some synthesizers may not respond to the MIDI signal sent by adjusting the Volume slider. The ZynAddSubFX synthesizer is an example of this. Some percussion (drum) sounds will only respond to the Velocity slider.

The “sfz” loudness can only be done with the Volume slider, because it must affect the volume while a note is playing. It initially goes loud, then decreases in loudness.

It is important to take note of the initial (or default) position of the Volume slider before using these buttons.

In the configuration files provided with the KeyMusician Keyboard, the volume slider tends to be set too high for using the Dynamics window, as shown in the screen-shot below:

Notice that the Volume slider is the same as the Velocity slider, which is already at the f (forte, = loud) setting, which doesn't give much room for using the “sfz”, “<”, or “louder” buttons.

A better setting of the Volume slider is shown below:

One tick-mark above the middle (under the “T” of “VELOCITY” or two-thirds the way to the right) is a good Volume-slider setting for using the Dynamics window.

The loudness changes made by the “<” and “>” buttons take place over a period of time, and when they get to the end of their range, the button is automatically de-selected. The “sfz” button works this way as well.

If you want the volume-change to stop before reaching the end of the range, simply press the key affecting the button (or click the button), which will deselect the button, and stop the change at that point. This works with the “sfz” button as well, but is less useful in that case.

The “louder” and “softer” buttons are activated by pressing the key affecting them, or clicking them. They are deactivated by a subsequent key-press or click. These buttons are useful when a sequence of notes (or single note) is to be played noticeably louder (or softer), then the former volume level is to resume.

The 'Clear' and 'Help' Buttons

You can't navigate to these two buttons at the bottom of the dialog box (Clear, and Help) using the tab-key, because any time the Dynamics (or Chords) window gets keyboard focus, for whatever reason, it shifts keyboard focus back to the main KMK window, so you can keep playing notes.

Fortunately, the Clear button can be activated from the keyboard by pressing the “End” key, and the numeric-keypad 5-key also does most of what the End-Key performs.

When you click-on the Help button, you get information similar to what you are reading now.

To return to playing chords using the numeric-keypad, simply press the Pause/Break key (or F14 on a Mac keyboard), which will de-select this button. You could do the same thing by clicking on it using the mouse (or track-pad).

You know how to do loudness (dynamics) effects in your music played on the KeyMusician Keyboard. Give it a try!